The correct title of the album is Munich 2016, not München.

A lot of online stores now have the cover art for the album.

As well as more information about the album and excerpts from the tracks:

A solo concert from Keith Jarrett – recorded at Munich’s Philharmonic Hall on July 16, 2016, on the last night of a tour – finds the great improvising pianist at a peak of invention. Creating a spontaneous suite of forms in the moment with the intuitive assurance of a master builder – interspersing touches of the blues and folksong lyricism between pieces of polyrhythmic and harmonic complexity – he delivers one of his very finest performances. An attentive and appreciative audience hangs on every note, every nuance, and is rewarded with some tender encores including a magical version of “It’s A Lonesome Old Town”…

Jarrett’s solo concert recordings form a unique and continually evolving body of work inside his discography. To trace the line that leads from 1973’s Solo Concerts Bremen-Lausanne is to follow an extraordinary musical journey. High points along the road have included The Köln Concert, Sun Bear Concerts – due for vinyl reissue in the coming months -, Concerts (Bregenz München), Paris Concert, Vienna Concert, La Scala, Radiance, The Carnegie Hall Concert, Testament, Creation, A Multitude of Angels, and La Fenice. Munich 2016 brings the story up to date, a document of Jarrett’s most recent European performance, held in ECM’s hometown. The particular intensity of the Munich performance singles it out as one of the truly outstanding concerts. So, too, the flow of its component parts.

The shape of the individual concerts has been transformed, the large arc of the early concerts, with unbroken improvisations spanning an entire set, giving way to performances made up of discrete, tightly focused spontaneous compositions. Since Jarrett embarked on this quest the number of solo improvisers has multiplied exponentially yet his sense for developing motifs and melodies and uncovering forms in real time remains unparalleled. There is, still, nothing else like a Keith Jarrett solo concert. “Through a series of brilliant solo performances and recordings that demonstrate his utterly spontaneous creativity,” the Polar Music Prize committee noted a few years ago, “Keith Jarrett has simultaneously lifted piano improvisation as an art form to new, unimaginable heights.”

Thanks to Matthias and Jan for the links.

It’s currently only listed on Japanese online stores (e.g. Universal Music Store, Tower Records, HMV, etc.), but it looks like a recording of the July 16, 2016 concert at the Gasteig in Munich will be released in November (November 1, 2019 in Japan).

This is currently Keith Jarrett’s penultimate concert, as he only played one concert since then, in early 2017, at Carnegie Hall.

Thanks to tgwhrk for the information.

The Finnish national broadcaster YLE will broadcast this concert on Friday the 3rd and Monday the 6th.

Regrettably, the broadcast is not available outside of Finland. Neither the broadcast, not the web stream can be accessed outside Finnish borders.

According to an article on HMV & Books (in Japanese), ECM will release J.S. Bach: The Well-Tempered Clavier, Book I in May 2019. This is a live recording of BWV 846-869, recorded on March 7, 1987 at the Troy Savings Bank Music Hall in New York, not to be confused with Das wohltemperierte Klavier, Buch I, a studio recording released in 1988.

Thanks to “tgwhrk” for the information.

Update (May 8, 2019). J.S. Bach: The Well-Tempered Clavier, Book I is now listed on many online stores. Challenge Records, for example, offers more information and sound excerpts. The correct release date appears to be June 14, 2019, not May 20, 2019.

These are performances in which tempos, phrasing, articulation and the execution of ornaments are convincing,” wrote Gramophone of Jarrett’s first recorded account of The Well-Tempered Clavier. “Both instrument and performer serve as unobtrusive media through which the music emerges without enhancement.” In this live recording from Troy, New York, made in March 1987, just one month after his studio recording of the work, Keith Jarrett addresses the challenges of Bach’s great set of preludes and fugues once more. Part of the goal is transparency, to bring the listener closer to the composer. As Jarrett explained at the time: “The very direction of the lines, the moving lines of notes, are inherently expressive…When I play Bach, I hear almost the process of thought. Any colouration has nothing to do with this process.

Thanks to Boris for the link. 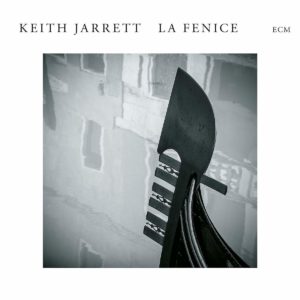 “This double album, long anticipated, presents Keith Jarrett’s concert at the Gran Teatro La
Fenice in Venice, from July 2006. The setting – one of Italy’s most famous classical venues –
may evoke some parallels with La Scala, the pianist’s much-loved 1995 recording, but each
of Jarrett’s solo performances is its own world, his protean creativity continually bringing
new forms to light. La Fenice (the phoenix) finds him channelling the flow of inspiration into
a suite of eight spontaneously created pieces referencing everything from the blues to
atonality. From the first flurry of notes, it is a consistently captivating journey. Between Part
VI and Part VII, Jarrett surprisingly but very touchingly segues into “The Sun Whose Rays”,
from Gilbert and Sullivan’s opera The Mikado.

Encores are the traditional tune “My Wild Irish Rose” (previously recorded by Jarrett on The
Melody At Night With You), the timeless standard “Stella By Starlight”, which the trio with
Gary Peacock and Jack DeJohnette often played (see for instance the albums Standards Live
and Yesterdays). The concert ends with a tender version of Keith’s tune “Blossom”, first
heard on the Belonging album with Jan Garbarek, Palle Danielsson and Jon Christensen back
in 1974.

La Fenice could be considered the culmination point of a series of solo concerts that began
the previous September with the The Carnegie Hall Concert. Reviewing that performance,
Fred Kaplan of The Absolute Sound wrote: “His concert pieces, all pure improvisations, are
models of economy, themes stated, explored, varied on, departed from, returned to, done –
and gripping from start to finish. The encores were similarly taut – and lyrical and gorgeous.”

Release of the Venice concert is timely. The 62nd International Festival of Contemporary
Music of the Biennale di Venezia has honoured Keith Jarrett with its Golden Lion for
Lifetime Achievement. It’s the first time that a “jazz” musician has received this award,
which has previously been given to contemporary composers including, in recent decades,
Luciano Berio, Pierre Boulez, György Kurtág, Helmut Lachenmann, Sofia Gubaidulina and
Steve Reich. Of course, there is more than one way to be a contemporary composer, as Keith
Jarrett eloquently illustrates on La Fenice, shaping his musical structures in real time.”

Thanks to Ziad, Stephen, Jan, Heino, Matthias, and Christoph for sending me information about this release.

Update (September 22, 2018). “The Sun Whose Rays” is already available from streaming platforms such as Deezer or Spotify. Thanks to Gabriele for the link!