According to La Biennale di Venezia:

“Due to recent health issues Keith Jarrett has cancelled all of his engagements for 2018.

29 September, Biennale Musica: there was enormous anticipation for the solo piano performance by Keith Jarrett, culminating in the awards ceremony for the Golden Lion for Lifetime Achievement, but recent health issues required Keith Jarrett to cancel all of his engagements for 2018, starting with the concert at Carnegie Hall in New York scheduled on March 21st and including his announced solo performance in Venice on September 29th. This timeframe affecting the Maestro’s schedule for the year has imposed a change to our programme.”

La Repubblica (article in Italian) is also reporting on the cancellation.

Thanks to Jan and Vasco for the links.

I don’t have any additional information at the moment. Let’s hope that Keith will get better soon.

Samples from the 12 tracks on A Multitude of Angels are now available on jpc.de.

Thanks to Aziz and Matthias for the link! 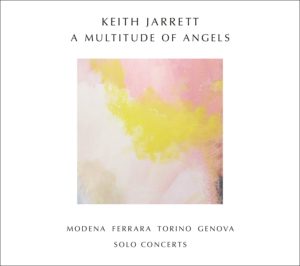 More information about the box set can be found in this post.

A Multitude of Angels is now listed on Amazon.com and Amazon.de.

A Multitude of Angels is a 4-CD set of recordings from a series of solo concerts in Italy in October 1996, documenting the conclusion of Keith Jarrett’s experiments with long-form improvisation in performances from Modena, Ferrara, Turin, and Genoa.

“These were the last concerts I played having no breaks within each set,” Keith Jarrett explains in his liner notes. “The arc of the music is characteristically comprehensive: jazz is ever present here, alongside my deep closeness with classical music (modern and ancient, Ives and Bach).”

Thanks to Lüth, Adrian, and Aziz for the links!

I’ve received the following information about the A Multitude of Angels box set:

“The next Keith Jarrett ECM CD release, “A Multitude of Angels” will not be be released worldwide until early November, not in October.

The box set will include 4 CDs, not 5. The flyer that ECM released for the recent solo concert in Rome on July 12 was not correct.

The 4 CDs will have the complete improvised 1st and 2nd sets of the following 4 solo concerts he performed in Italy in 1996. Plus a few encores from certain of the concerts are included where the overall timing for each CD allowed.

These were the last 4 solo concerts Keith ever performed in Europe at which he performed two long continuous sets like the Koln Concert, Paris, Vienna and La Scala concert recordings. These were also the last concerts he performed before he stopped performing for 2 years when he was diagnosed with Chronic Fatigue Syndrome.” 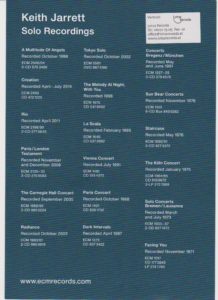