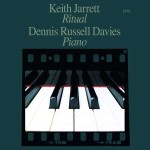 Some information about the album from AllMusic:

“Keith Jarrett does not actually play on this LP; rather, it is Dennis Russell Davies, a classical pianist and conductor with whom Jarrett collaborates frequently, who performs this 32-minute Jarrett composition on a grand piano. Ritual has several of the characteristics of Jarrett’s solo improvisations — the repetitive vamps and ostinatos, wistful lyricism, ruminative episodes developing organically out of what preceded them — but without the jazzy/bluesy feeling that runs through the solo concerts.”

Thanks to Arnulf and Matthias for the information.