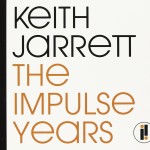 This is already old news, but Universal Music Group has re-released “The Impulse Years 1973-1976” as a single 9-CD box set in October 2013 in Italy. The box set is available as an import in most European countries.

There’s apparently nothing new in this reissue. All the music on it was previously available on two separate box sets, “The Impulse Years 1973-1974” and “Mysteries: Impulse Years 1975-1976”.

Thanks to Jon for the information.