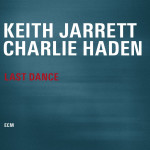 Thanks a lot to Stephen from Marlbank for letting us know that another duo album with Charlie Haden will be released in June 2014.  According to Marlbank:

“The material featured on the album includes ‘’Round Midnight’, ‘Dance of the Infidels’, ‘My Old Flame’, ‘My Ship’, and ‘It Might As Well Be Spring’ as well as ‘Everything Happens To Me’ and ‘Every Time We Say Goodbye.’

Alternate takes of Jasmine tracks ‘Where Can I Go Without You’ and ‘Goodbye’ also feature.”

The album is already listed on Amazon with a release date of June 17, 2014.

Update (May 16, 2014). Thanks to Håvard again for letting us know that Amazon UK now has samples for the nine tracks on “Last Dance”. The tracklist is also available.

Update (June 8, 2014). “Last Dance” will be available from Qobuz in Studio Masters quality (24 bits). It will probably also be available from HDtracks, HighResAudio, and GubeMusic. Thanks to Wookyung for the information.